You’re offline. This is a read only version of the page.
ATP Template with bundler

What are you looking for?

How can I get a replacement motorcycle CBT certificate if mine has been lost/stolen?

You will need to contact the training school where you took your CBT course via the link below – they can charge up to £20 for the replacement copy.

If your certificate has been stolen, report it to your local police via the link below:

If the training school has closed, you will need to contact the Driver and Vehicle Standards Agency (DVSA) via the information below (telephone lines are presently unavailable due to COVID-19):

You will need the following:

Can you tell me about being able to ride a moped / motorcycle?

Can I carry a passenger on my motorbike and is there an age limit on being a pillion passenger?

In order to carry a passenger on a motorcycle:

In the case of a child, although there is currently no minimum legal age for them to ride as a pillion, they must wear a suitable helmet, be able to sit astride the motorcycle seat with their feet on the footrests and be able to hold on properly. Additionally, they should wear suitable protective clothing and it is strongly recommended that they have parental consent.

Is it legal for a pillion passenger to ride backwards on a motorcycle? (for example to film something)

Strange as it may seem, and no doubt you will have seen this on say the London Marathon, it is legal for a pillion passenger to sit the wrong way around on a motorcycle as long as footrests are provided.

Is it legal to cover my car or motorbike whilst it is on the road?

Mechanically propelled vehicles on a public road are required to display number plates (number plate in the case of motorcycles). Covering the vehicle could prevent them from being seen and this would be an offence.

What are the rules for drivers in relation to advanced stop lines for cyclists at traffic lights?

Some traffic light controlled junctions have an advanced stop line (ASL) to allow cyclists to be positioned in front of other traffic - please see the diagram below: 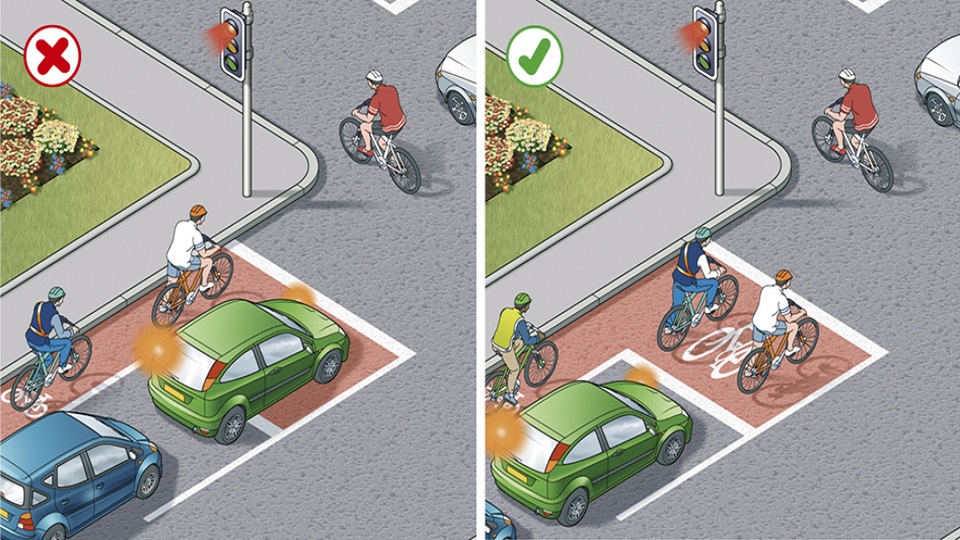 If the traffic lights are on red, drivers (including motorcyclists and scooter riders) must not cross the first stop line - if they do they could liable to a £100 fixed penalty and three penalty points on their driving license.

If the lights change from green to amber as a driver (including motorcyclists and scooter riders) approaches but they cannot safely stop before the first stop line, they can cross the first line but must stop before the second stop line. In these circumstances it is not an offence to stop in the marked area.

Drivers (including motorcyclists and scooter riders) should avoid blocking/encroaching onto the marked area at other times e.g. when the junction is blocked.

Some local authorities have run publicity campaigns with slogans such as: The bike box - get behind it.

Can I wear sunglasses whilst driving at night?

Although it is not illegal to wear sunglasses whilst driving at night, it is not advisable as it is essential your vision remains clear at all times.

For further information please see the link in Related Information to the AA website.

If you can't find the answer?